So, I playtested again with the primary aims being:

That last one is the toughest and goes hand in hand with other points on my list.

We playtested this model again, of having locations in the middle of the table that players attempt to gain control of by battling their soldiers against each other, and trying to reach the point value of the location before the other players. You can power up your soldiers with ration cards and power down opponents with attack cards. The idea was that players begin with 5 cards each and can play a soldier and a ration or attack card on their turn. Ration and attack cards could not be played if you had no soldiers on the location you want to play them on. The idea of the locations was that players would gain control over them and use them to build their own map, with the first person to finish their map being the winner. Our playtest was VERY similar to the one in the last post, but the soldiers had their powers given back to them, in an attempt to make the game more interesting. This didn’t really work.

The playtest actually got to the point where I said “Stop. This isn’t fun. How do we make it fun?” I pulled out the games I own again and had a thought (scary, I know). My most recent purchase (as of the playtest) was this:

For those of you who do not know, Pandemic:The Cure is a game with a difference :it is a co-opoerative game, where players work together to ‘win’ the game. I think one of the reasons I thought about Pandemic as a reference point is because of Jacob’s comment on my last post, regarding making my game interesting by perhaps making a cooperative mode, where players work together to build the map. I found this interesting so I considered making my game primarily cooperative, especially since I enjoy this in Pandemic (still haven’t won, by the way). I also looked at the mechanics of Pandemic and found it interesting that the game uses dice as the ‘computer player’ if you will, to overcome the issue of players not versing each other but versing the game. So, Version 4/5-ish (there have been a few) of my game was born. 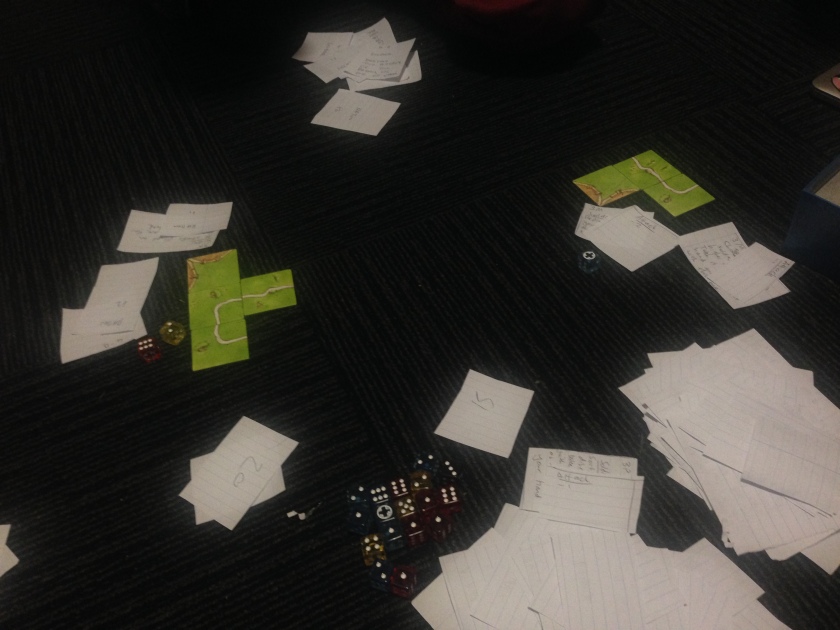 The idea was that players would begin with 4 map tiles each, and the players would be separated (as seen above). The players would have a ‘Player Phase’ (kind of like in Fire Emblem) where they would simultaneously place one soldier and one ration card down in front of their map part. There would then be an ‘enemy phase’ where there would be 10 dice that would be rolled all at once, attacking one player at a time. Every dice that is lower in value than the solider+ration would be taken out of play and the player would win a map piece, with the aim being to make a map that would eventually join you and other players together. Every time the dice was above the value of the solider, the soldier would be taken out of play. We immediately noticed problems with this, especially in how quickly your soldiers could be taken out, as well as how quickly enemy dice could be taken out. And naturally, it could potentially end very quickly.  My playtester did comment that the game seem disjointed and said “Why are we building separate maps?”. So, for the next iteration, we decided that players would all build the same map (like Carcassonne), but we decided that the game would be ‘cooperative to a point, but would always have one winner’.

This is what happened…

So, we liked the idea of keeping the solider cards, the map pieces and the dice. So, we decided that one map design would be created with players all contributing to the one map. To have an end goal or motivation, it was decided that each player would have a whole map in their colour, and would draw from their pile when placing pieces, so you can easily tell how many pieces each player has influence over. The game would have a ‘Player Phase’ where players simultaneously place a soldier and a ration card down. Then the ‘Attack Phase’ where players would take turns rolling one dice for each enemy soldier, one at a time (eg. if an opponent has two soldiers, you would roll once die, see the outcome of it, and then roll another die for the other soldier). If your die is above the value of their soldier, you win a map piece, to draw from your pile (you only win if you’re the attacker whose die is above, if their soldier is above your die, nothing happens except you lose a die), if their soldier is higher, you lose a die and give it to the player you lose against (players start with a set amount of dice, 15 at the moment). When you win a map piece, you can add it to the map, or hold on to it for later. If you choose to add it, you place it in the map, unless someone has a duplicate piece already placed. You then can ‘gamble’ to see who wins the influence over that piece, by a die roll (or soldiers, still to be determined). If you lose the gamble, you hold on to the piece in case a soldier with a tile stealing ability comes up later.

The game wins when the map is finished. Players are eliminated when they run out of dice (some tiles have a dice icon on them, to give opportunities to gain dice). If there are only two players and one runs out of dice, the game ends and players count up how many map tiles they placed. The person with the most tiles wins.

So, players basically work on the one map, but the winner is determined by how many pieces each player placed. I wanted to make a cooperative game for the interactions and alliances that these sorts of games help to build.