With the occasion to review a board game, I was quick to force my family into playing Pictionary. With mum who has terrible drawing skills and dad who tried to incorporate alcohol in anyway just to get through it, it seemed only my 11-year-old brother was keen on the idea. However; with a not so enthusiastic start, a family night of Pictionary turned out to be fun and pretty hilarious. This is a challenge for any readers to guess the word my dad tried to draw, the answer is at the end of the blog… it was a tough one! 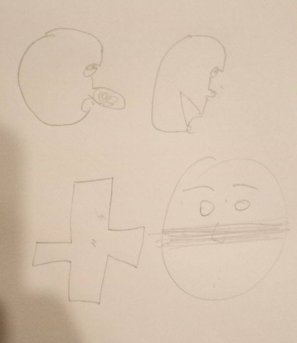 Pictionary, a game first published and designed in Robert Angels bedroom by Robert Angles in 1985 was such a hit it was distributed in over 70 countries within 8 years. It was inspired by Charades (designed during the 18th Century) and a little party game he created where party guests have to guess what random word from the dictionary he is trying to draw. The concept of the Pictionary – in short – is to get around the board first by interpreting a word in drawings while others try and guess what it is under a time limit.

Hasbro; publisher of Pictionary since 1994 (originally published by Angel Games), has developed and stimulated many varieties of the game such as Disney Pictionary Game, Electronic Pictionary Man Game, Pictionary Card Game etc. The game was so successful it was even turned into a 90’s television program ‘Pictionary’ hosted by Alan Thicke where random contestants and celebrities played an adapted version of the game on air to win money. More recently the game has even been customized into a highly successful app called ‘Draw Something’ released in 2012. The app topped an impressive 50 million downloads in 50 days. Zynga (2012, p. 1) the owner of OMGPOP who are the producers of Draw Something claims that “The day the game launched, users created three drawings per second. And, at its peak, Draw Something users generated 3,000 drawings per second”.

As far as rules and playing the game goes, I find, the leniency and strictness depends on who’s playing. As far as my family goes who are known to be much sportier and in by no means creative, there was a lot of cheating and a lot of leniency. I found our game of Pictionary included a few sneaky charades movements, miming and writing of words. For example, my brother thought writing a car saying “I need soap” to represent a car wash was totally acceptable. Let’s however go through the “intended” rules and set-up of the game. 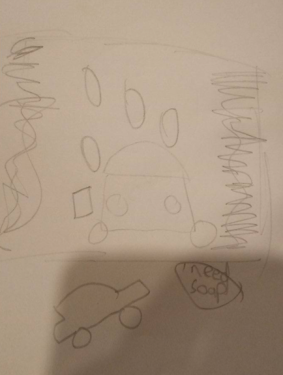 Upon purchasing your approximately $32 Pictionary game and opening the 1.4kg and 6.6 x 17.8 x 1.2cm dimensional box (quite sleek and good looking packaging I might add), you set up the table by placing the board in the middle with two playing cubes on the starting square (we have two teams of two). You also need the word cards, sand timer and one spot die nearby and each team get a pad and pencil. This edition of Pictionary included a challenge die which adds extra difficulties such as drawing with your eyes closed, drawing two pictures in the time of one, or, using your other hand. My family didn’t need these extra challenges; I couldn’t foresee us ever finishing if we did, and so we left that in the box. Beginning the game everyone started on yellow, each square has a different colour representing a category. In this case yellow represents a person, place or animal. 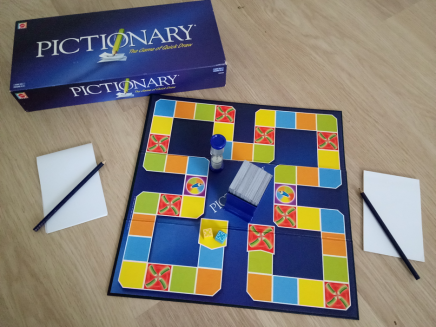 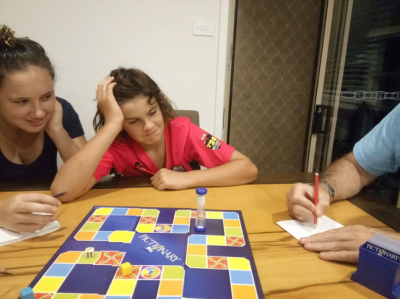 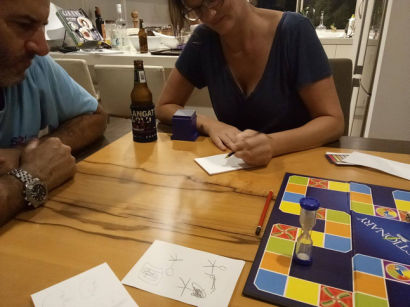 My favourite thing about this game is the rush, everyone is concentrating and laughing at each other at all times. There is no time for distraction or boredom because everyone is always involved… and the drawings are terrible. There were many “what the hell is that?!” moments. It also isn’t necessary to be a good drawer to play this game, which was proven when I played with my family, you only need to be imaginative. In terms of the product, you can’t purchase the game and think you are set for life, paper will run out and pencils will need sharpening, so think about having a sharpener handy and possibly and extra pad when playing. And finally the answer was nose job.