Fat Penguin has been the result of a process of ideation, rapid prototyping, and iteration. The iterative design process is cyclical, and ‘alternates between prototyping, play testing, evaluation, and refinement” (cited in Eladhari & Ollila 2012, 392). My development process has involved a long series of prototypes, playtests, feedback, and change.

At the start of development, I decided to create a drinking game. I wanted to make a game to help make friends at parties.  My design process began with setting my basic player experience goals (Fullerton & Hoffman 2008, 11). I wanted to create a drinking game without all the ‘bad bits’ of other drinking games – getting way too drunk, feeling pressured to drink, not being able to participate for physical reasons, over-competitiveness, and plenty more.  I wanted a friendly, inclusive game. As part of this, I decided not to include a win mechanism in the game. The player experience goals were to make friends and have fun, as well as to engage creatively with other players.

I began my ideation process with a super rough prototype. Using coloured paper, I decided on the five categories of the game, and that different colours for each category would make the game customisable for different groups of players. I brainstormed with Chris and my classmates and wrote down examples of each category. 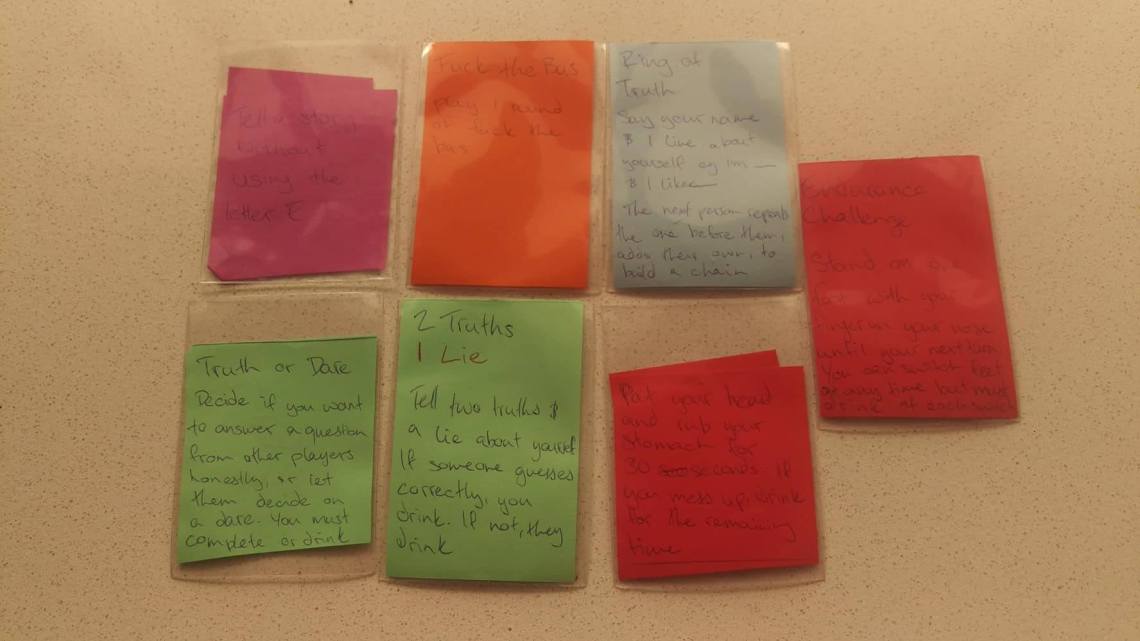 That evening and over the next day I used Go Deck Yourself, and online platform, to develop a simple and basic prototype as proof of concept. I found a suitable image with an unlimited, open license to use for the card backs. I put it all together across the online platform and in Microsoft Word, set my housemates to cutting out cards, and invited a group of friends over.

The first prototype had only 20 cards, including duplicates. The feedback from players was that the colours of the cards made them difficult to read in the dark, that more cards were needed, and some mechanics needed to be clarified. Overall though, the playtesters agreed unanimously that the game was fun and invited creativity and variation. We added two new cards during the first playtest, pictured below.

During this initial playtest, there was minor damage to a couple of cards, leading me to investigate the price and practicality of laminating future prototypes.

The second playtest was with my family my boyfriend. This was an opportunity to playtest Fat Penguin across age ranges (23-52) and within a family setting.The game had variety and good cohesion. However, there was a dispute between players about the subject/content of a joke made during gameplay, leading to a revision of the rules. I felt this was a necessary revision to meet my original player experience goals. Players also suggested changes to card mechanics.

My next playtest was in class. I felt that this was the perfect opportunity to test whether the game could be played both with strangers and sober. Feedback was positive and I now have a better social relationship with all players. Playtesters gave useful feedback about adjusting the reward mechanics for a couple of ambiguous cards, and made some great suggestions. As a result of this playtest, many cards were adjusted and a couple were added to the next iteration.

The third playtest was at a friend’s birthday. The conditions of this playtest were similar to the first – about half of us were close friends, while the other half hadn’t met us before. This playtest was incredibly helpful to refining mechanics and producing new cards. The players who had been part of the first playtest confirmed that the mechanic changes in this iteration were much more clear and rewarding. The whole group was helpful in brainstorming new cards, including Dark Side of The Moon (one of my personal favourites) which requires all players to switch seats and sit next to someone they haven’t sat next to yet.

After four play tests, each with their own new iterations of Fat Penguin, I decided to begin the next prototype. I chose a new aesthetic to increase the visibility and readability of the cards. I opted to use the Open Dyslexia font to make the game more accessible, in line with my original goals and the inclusive spirit I wanted Fat Penguin to have. I also added a range of new cards to each category, bringing the total number of cards to 40 – 8 unique cards in each of the 5 categories.

Go Deck Yourself went offline for a number of weeks. This prototype was made entirely in Microsoft Word, using built-in outlines and colours, Open Dyslexic font package, and the same open license image as in the last prototype. The template I made for getting the card sizes correct can be found here.

I haven’t had the chance to playtest this edition yet, but I have previewed it to previous playtesters with positive feedback. After discussing aesthetics with friends and family, I have decided to use a square outline for the next iteration, allowing for better use of space.

I’m currently in the process of contracting a graphic designer for a logo/graphic that I can copyright, and look forward to publishing the game later in the year. I plan to make it available in a print-and-play format, or as a box set through a distributor that offers print-on-order.

View all posts by holyshitmoments