For this week, we initially brainstormed ideas for games based off titles and basic concepts. Most of my ideas drew inspiration from video game concepts and mechanics, because my game experience in general is heavily influenced by video games, and I think that a lot of video games have fascinating narratives and mechanics to try and adapt to an analogue setting.

– a PVP D&D style game, where instead of working together to defeat NPCs that the DM creates, the players work against each other to be the victor of a narrative that the DM spins
– an exploration-focused game where players investigate their surroundings to find a way out, but each have their own hidden agenda in the sense of Werewolf/Mafia; my inspiration for this was the manga Doubt, which is also based off Werewolf/Mafia style games itself
– a mystery game centred on individual settings, similar in execution to murder mystery board games like Clue, but players are trying to piece together evidence to understand the setting as a whole; it’s a very common narrative across video games as a whole, but the first comparisons that came to mind were horror/mystery games like SOMA and Amnesia
– a physical bridge building game geared towards a large age range that just involves using provided materials to construct a bridge and then test whether it works, like an analogue version of Bridge Builder
– resource-based game focused on space rocket construction, similar to Kerbal Space Program 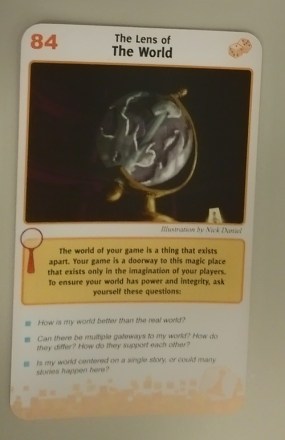 After that, we had to choose one of our ideas and expand on it based on assigned lenses; since mine were the Curiosity and World lenses, I went further into the setting-based mystery game, and quickly found that it would be a concept that would require a great deal of playtesting and adjustment to figure out what mechanics would work best. For example, although it would work easiest with a DM, it would also be a much more engaging game for all players if I could remove the DM, but that creates problems with making sure the mystery runs smoothly with no one “in the know” to manage it.

The inherent problem with a mystery that involves neither a DM or a random assignment aspect like Clue is that it loses replay value if the mysteries and settings remain the same; I’d need a way to vary the answers so widely that it could be replayed without the answers becoming obvious to veteran players. If I wanted to pursue it further, I would probably look into a game like Sherlock Holmes Consulting Detective for ideas on how to make a detailed mystery work without a DM or randomly assigned villain player.