I believe that the game I created involves some confrontation in the gameplay and that by adding this the mechanics of the game become more interesting and dynamic to play. The confrontational elements include the action cards which are scattered throughout the deck of cards. These action cards allow for a change in gameplay while it is progressing and allow for players to play strategically with each other.

Playtesting this week turned out to go really well. I had changed my game with the suggestions from last weeks test and found that the change made a big improvement in gameplay for the players. The players commented on the fact that they enjoyed the game and it was very easy and quick to pick up. There were also some other ideas that they brought up which I was debating on including in the game but found that it would make it to complicated or long which isn’t what I wanted to do.

I worked a bit on the gameplay loop to modify how the players use their turn. I ended up tinkering with this idea a bit and finding some action cards which would work well with the game. This is where the ideas of UNO starts to make an appearance as I have incorporated the Reverse, Skip, Draw and Clear cards into the game to make it more confrontational and interesting. I came ended up liking the gameplay loop bellow as it wasn’t too complicated but had a variety of things that players could do to make gameplay interesting. 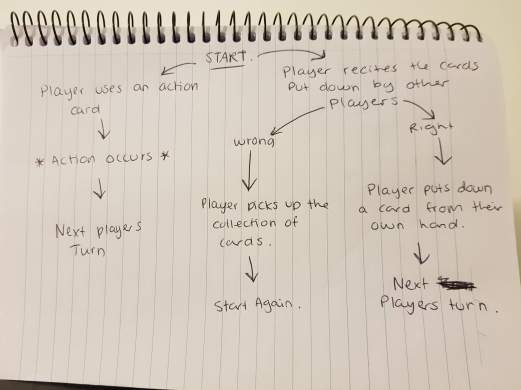 I believe that testing this week was a success as I found a few things to fix and polish but overall I feel like the game is coming together nicely.

View all posts by rebeccaneilson