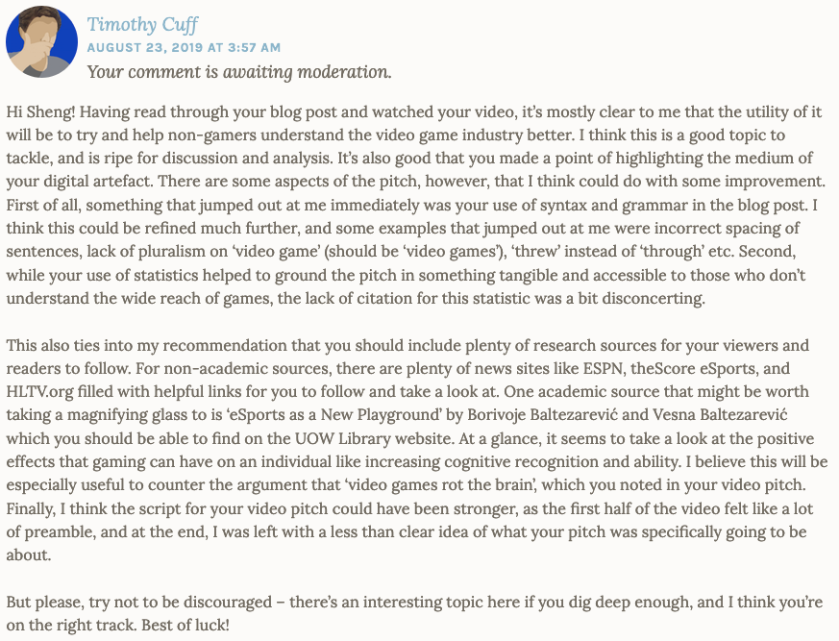 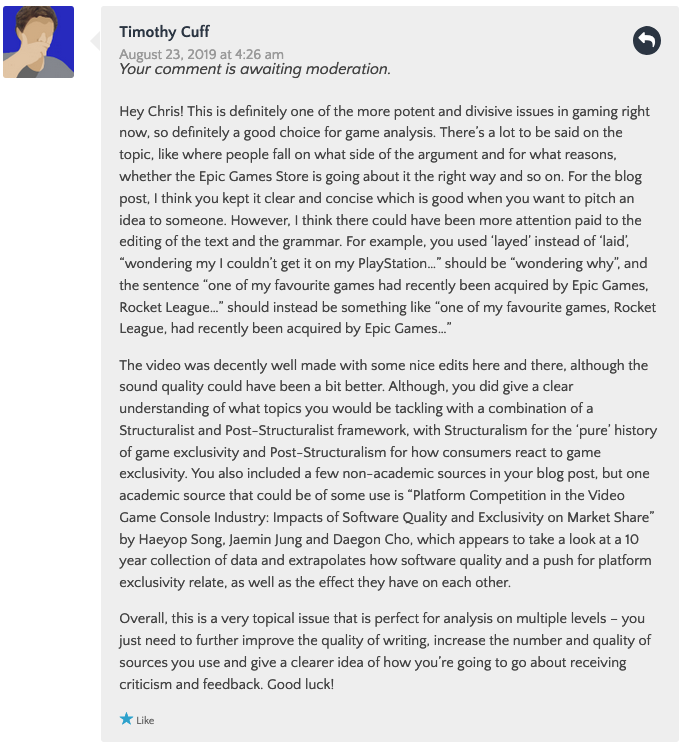 Above, you will find screenshots for the three comments I made for different BCM215 Digital Artefact pitches. To summarise the pitches quickly, the first was about the appeal and popularity of gaming and the reasons for why that is, the second was about exclusivity in gaming, its history as well as fan reactions to exclusivity and the final one was about replay value and why certain games for certain players have some level of ‘replayability’.

With all three comments, I ended up formatting them the same way: highlighting what they did well, then critiquing what they did not so well and finishing on some words of encouragement. Having this loose but easy to follow structure allowed me to focus more on analysing the pitch rather than fretting about how I was going to word a comment appropriately. What’s more, I tried to contribute something of value to each, whether that be advice on what could have been improved and tweaked, or recommendations of what might be added to enhance the quality of the pitch. Through these avenues of delivering feedback, I was able to engage with the post by providing my own critical evaluation of all three pitches.

In addition to this, I attempted to provide some extra research to further supplement what was already provided. In all three, I sought out academic journals and articles as best I could to help lend their work more credibility and legitimacy. Depending on the situation, I also provided other, non-academic sources like suggesting different news outlets for eSports coverage. In some cases, I suggested different approaches as well, which mainly centred around what analytical framework they could use, which were a Structuralist approach, a Post-Structuralist approach, or some combination of the two. Ideally, however, I could have and perhaps should have thought more carefully about other frameworks that were more pertinent to each pitch and could have been utilised advantageously, like a socio-economical framework or political-economical framework.

In terms of what else could have been better refined, I think I could have been a bit more positive on the whole rather than focusing largely on the negatives. While talking about the bad aspects of a work is arguably more helpful for improvement, it might not come off as such to the person taking in the criticism if it’s just being read rather than listened to. Furthermore, I think I should have practiced more due diligence with the final comment in particular as I neglected to include a source of research and had to add it as a reply to my original comment (as I couldn’t seem to edit the original).

On the whole, the comment-writing ‘experience’ helped me to think more critically about not only other people’s work, but my work as well. By taking a look at the problems in someone else’s pitch, it allowed me to expose flaws in mine which I will hopefully be able to improve upon in the future, by being more discerning about what I include or don’t include in my work and critiques, and looking back at what I’ve written about other pitches and try to avoid the same mistakes.