Read my articulate and ostentatious boi, I put a lot of effort into him

Commencing BCM300: Game Experience Design, we have been playing board games to consider the construction of the game and its effect on the players. Through this reflection, I’ll be looking at four games I’ve played during my class time. Each one will state information found online through the BoardGameGeek website and will have my own views on its mechanics, rules and setting. This will also include whether I think the game was successful or not and where I would improve it. 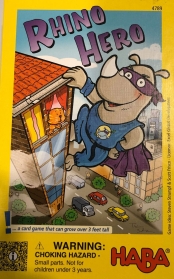 Rhino Hero is a board game that is designed so that players are taking turns building levels of a structure for the Rhino Hero to climb, situating it in Caillois(1961) category ilinx or Stewart Woods(2012) category of Space games. The objective is to not…